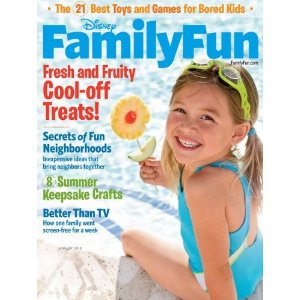 Subscriptions to Disney FamilyFun Magazine Now Available on iPad
Disney FamilyFun Readers Now Have the Ability for One-Click Subscriptions or Single Issue Downloads
NEW YORK, NY— JUNE 23, 2011— Beginning with the June/July issue, readers can now experience the great content and features of Disney FamilyFun magazine on iPad by purchasing an annual subscription through In-App Purchase on the App Store. Using the new subscription service, a 12-month subscription of FamilyFun costs just $7.99. Single issues will continue to be available for $2.99 through In-App Purchase, and current print subscribers will have access to the iPad edition for free.
"We wanted to make our Disney FamilyFun content available to our readers in the most convenient ways," said Aparna Pande, vice president and general manager, Disney FamilyFun. "With the Disney FamilyFun App, we are able to offer a high quality experience to moms who want to make one of our crafts or create a FamilyFun meal whenever they want and wherever they are."
The Disney FamilyFun App brings content to life on iPad through interactive features, including videos showing projects in action, slide shows offering an in-depth look at how crafts and recipes come together, and features allowing the user to search for, save, and share pages with friends through Facebook and Twitter. Several brands, including launch sponsor Nissan, have signed on to support FamilyFun through digital sponsorships.
"We conducted research among users who downloaded the Disney FamilyFun App and engaged with it during the launch issue. The initial feedback has been overwhelmingly positive," said Pande. "Nearly all of those surveyed said they'd recommend the app to a friend, and more than two-thirds planned to use the app more than once a week. Most importantly, over half said they would be interested in subscribing to the Disney FamilyFun iPad app, and now we are able to bring this option to our readers."
The Disney FamilyFun App is available for free from the App Store on iPad or at www.itunes.com/appstore. A 12-month subscription is available for $7.99, and single issues are available for $2.99 each, through In-App Purchase.To learn more about FamilyFun, visit FamilyFun.com and Facebook.com/DisneyFamilyFun, or follow @FamilyFun on Twitter.
About FamilyFun Magazine
Published by Disney Publishing Worldwide, Disney FamilyFun magazine, which targets families with children under 12, has a rate base of 2.1 million and a total audience of 5.5 million (Source: 2010 Fall MRI). A trusted source for families, FamilyFundelivers real ideas for — and from — real families. FamilyFun magazine's lively and informative content focuses on making the most of family time together through cooking, crafts, celebrations, volunteering, travel, and other family activities. The Disney FamilyFun brands include FamilyFun.com, FamilyFun books, craft kits, mobile apps and special interest publications.
About Disney Publishing Worldwide
Disney Publishing Worldwide (DPW) is the world's largest publisher of children's books and magazines, with over 250 million children's books and over 400 million children's magazines sold each year. Disney Publishing Worldwide consists of an extensive worldwide licensing structure as well as vertically integrated publishing imprints including Disney Book Group in the U.S., Disney Libri in Italy and Disney Libros in Spain. DPW publishes a range of children's magazines globally includingTopolino, Le Journal de Mickey, and Donald Duck, as well as family titles in the U.S. which include Disney FamilyFun andPhineas and Ferb. Disney English is DPW's English language learning business which includes Disney English schools in China and a worldwide retail licensing program. DPW's digital products include bestselling eBook titles as well as original apps. Headquartered in White Plains, NY, Disney Publishing Worldwide publishes books, magazines, and digital products in 85 countries in 75 languages. For more information visit www.disneypublishing.com.
[official press release]
Posted by Rosemary at 7:14 PM